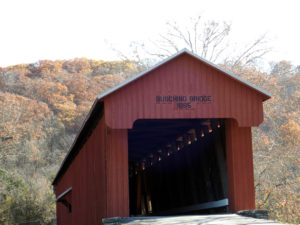 I decided to drive more of the bike trail and was pleasantly surprised to find not one, but three special bridges along the route. I started out at the Welcome Center in Versailles, crossing US 50 and taking a right on Perry Street. Continuing on Perry Street, I came upon the Busching Covered Bridge which lets out near the entrance to the Versailles State Park. It’s a beautiful, well maintained bridge with easy access off US 50 just as you enter the park making it a favorite of photographers. The bridge was built in 1885 by Thomas A. Hardman and spans Laughery Creek on CR 40 South. The design is a covered Howe through truss. The 182 foot all w

ooden structure is open to one-lane traffic. I took a right as I exited the bridge and found myself back at US 50. I turned left to cross the highway and immediately took Cave Hill Road south.

The bike trail takes you through a lot of interesting places along the way. I found the Blair Family Cemetery which was established in 1838. There were a number of well-kept farms, gorgeous views, and I really enjoyed seeing several horses in the fields that day.

The next bridge I came across was a concrete arch bridge. The 202 foot, two-span concrete arch bridge over Laughery Creek on Cave Hill Road was built around 1910. It’s a closed-spandrel arch design and is open to one-lane traffic. Crossing over it, you may not realize it’s a stone arch bridge. Taking advantage of a pull-off after crossing the bridge, I took a few photos. A writer friend of mine once told me that there is a big difference between viewing a bridge from the top and viewing it from the water. I would have to agree with him on that.

A short time later, I slowed down for a bend in the road and noticed a sign on an old building which read, “Locust Grove School House 1904-1925.” I wondered how many people had passed the one-room school house and had no idea it was there.

Continuing on, I found a 174.8 foot steel bridge. This 9-panel, riveted Parker through truss bridge  was built around 1920 and is also open to one-lane traffic and spans Laughery Creek. I found a great site that had a link to a youtube video of the bridge.
The three bridges have things in common, but they are all very different. I would speculate that when Thomas A. Hardman built Busching Bridge, wooden covered bridges were the most economical way to build. The concrete arch bridge offered advantages that the earlier wooden bridges didn’t such as durability and added strength. Ten years later, when the Parker through truss bridge was built, steel may have been an easier and more economical way to build. Today’s bridges are built with a combination of steel and concrete, some are short and some are long, but they all play an important part of our transportation system.
How many other treasures are hidden along the highways and byways of our county? More later…
Terri