It’s hard to believe we are almost to the end of October! This past week I had the chance to visit a local farm and see how sorghum syrup is made. Who knew we had a sorghum mill in Ripley County? Fallen Timbers Sorghum Farm is located on Highway 129 in Milan. This is a fourth-generation family operation. The mill was originally built in 1890 by Dr. Larry Barlow’s uncle’s grandfather near Farmers Retreat in Dearborn County. He has since moved it to his farm in Milan where he processes the sweet sorghum as they did in 1890. The sorghum is evaporated over a wood fired furnace in a copper evaporator built around 1900. Cooking over the wood fire gives the sorghum a dark brown color.
In the summer, you can see the sorghum growing in patches near the road. The day of my visit, the sorghum had all been cut and was loaded on wagons ready to be pressed.

The mill in use 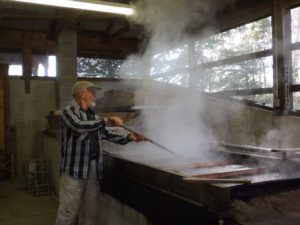 Impurities are skimmed off during cooking

Larry told me the cooking process usually takes about 5 days once he starts. This year he only had enough sorghum cane to run for three days. His crop didn’t do as well due to the rain we had earlier this year which stunted the sorghum plants. He usually runs with a crew of at least four. The day I visited he had five helpers including a dentist friend who stop by for a visit and decided to help with the run because he was enjoying it so much. Most of the people helping this year do it every year because they enjoy the experience.
It takes at least two to run the press (but three is better); another person needs to keep an eye on the bubbling sorghum passing through the various stations. Dr. Barlow takes care of keeping the wood furnaces fired and stoked. As the water evaporates, the minerals and impurities float to the top and are removed along the way. The sugar content increases until it reaches about 75 percent.

At that point, the syrup runs through a pipe into a fine mesh screen which removes any remaining sediment as it empties into a container. The syrup is then poured into the final cooking station. The final stage has to be a controlled steady low and slow heat. After cooking the sorghum syrup to the proper consistency, it is put into jars where it continues to cook until it cools — the same as it was done in 1890.

I enjoyed my visit to the sorghum mill. Check back next week to see what other treasures I’ve found.