New Director Getting to Know the County

New Director Getting to Know the County

Hello everyone, my name is Terri Trowbridge and I am the new Executive Director for Ripley County Tourism. Katherine Taul previously held the position until she retired after 16 years of service on September 1st, 2017. It’s hard to believe it’s already been a month!

It’s funny how you can live somewhere for 34 years and not know about some of the things that make your county special. When you have a full time job and family to keep you busy, it can happen pretty easily.  I drove much the same way to and from work for the last 21 years in my previous job as Director of Publications for the National Muzzle Loading Rifle Association in Friendship. When you drive the backroads straight to work each day you can miss a lot. But… things have changed in my life, and now I have a whole county I need to get reacquainted with.

It’s hard to live in Ripley County and not know about the Pumpkin Show.  I’ve been attending the Pumpkin Show and the parade on Saturday morning for years. I’ve rode the rides, pulled ducks from the duck pond, admired the artwork of local artists on display inside the courthouse, bought countless raffle tickets supporting local clubs, eaten cotton candy and of course, elephant ears, and admired the big pumpkins at the end of the parade. However, this is the first year that I’ve actually witnessed the pumpkin weigh-in.

As the hoist lifted the straps, the rope closed in under the pumpkin and allowed it to be raised in the air.

It takes place at the main stage at the end of the parade. Everything moved along rather quickly considering that some of the pumpkins weighed over 500 pounds! A crane hoist on a truck was placed in front of the stage and the pumpkins were brought on a trailer or truck bed to the hoist. 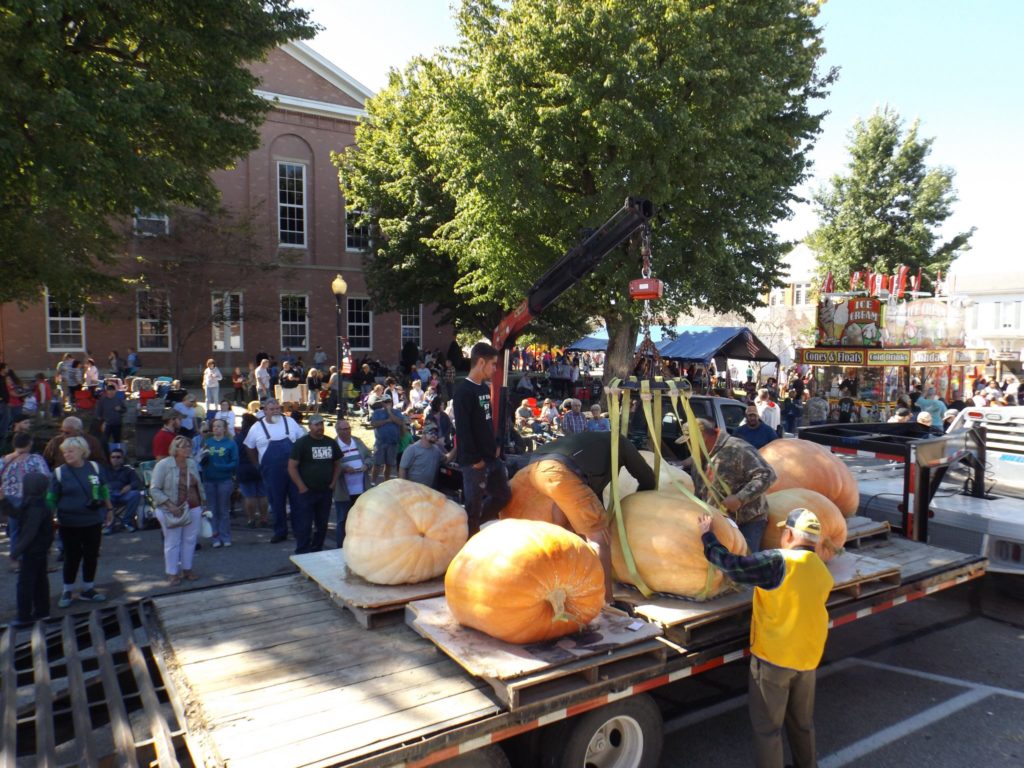 A series of straps were placed around the pumpkin with a rope looped at the bottom. As the hoist lifted the straps, the rope closed in under the pumpkin and allowed it to be raised in the air. The pumpkin was quickly and expertly inspected to assure it was solid, and the class and weight were announced. Then it was on to the next pumpkin until each had been weighed. This year’s winning open cla

This year’s winning open class pumpkin was grown by Darrell Franklin of Holton, IN and weighed in at 692 pounds!

ss pumpkin was grown by Darrell Franklin of Holton, IN and weighed in at 692 pounds!  It didn’t break the record, but Linus would have been proud of this great pumpkin!

I’m going to do my best to get to know the county better over the course of the next year and I’d love it if you want to come along. Look for a new post from me each week telling you about what I’ve discovered.